Tiamo, the open to sky Italian and Mediterranean restaurant at the Hilton- Conrad, Bengaluru was host to Dalmore and Jura’s whisky tasting session earlier this week.

Overlooking the infinity pool surrounded with nicely lit plants, cabanas and with soft music in the background, Tiamo provided the right ambience for the evening. Bengaluru’s famous weather too played its part in being a perfect host. There was a light breeze blowing throughout the evening with the occasional drizzle that encouraged you to reach out for your malt and soak in the complete experience. 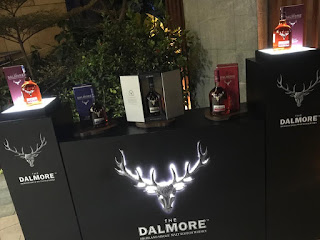 We were welcomed to an informal setting where we could stand comfortably and move around meeting and interacting with malt lovers and select members of SMAC, Single Malt Amateurs Club. The evening brought together whisky enthusiasts  from different backgrounds to help share their experiences and tasting notes with each other.


The evening started of with a John Barr based cocktail to possibly announce the launch of John Barr in the Indian market.

The John Barr blend was created for the UK market in the 1970's to imitate the then withdrawn Johnnie Walker Red Label. However, more than four decades later the John Barr Black still has very strong candid resemblances to the Johnnie Walker Black label bottle.


Quoting Sumedh Mandla, CEO of VBev, India on the John Barr’s launch in India, “We are very excited in bringing a great scotch blend to India, especially the current price point.” John Barr retails at about INR 2650 in a few markets

As the evening gathered momentum, we began the tasting of an expression each of the both the malts starting with the Dalmore 12 and followed by the Jura 10.


Dalmore 12 is aged for the first nine years in American white oak ex-bourbon casks, before half is transferred to ex-Oloroso sherry casks for the final three years. The result is a whisky with a combination of sweetness and rich, sherry flavors.

The Dalmore has a reddish orange hue with a fruity aroma and a little spice. Steve, the global brand ambassador of Whyte & Mackay said it tastes like drinking the whisky in a warehouse. This expression definitely is much drier on the palate as compared to the aroma.

The Jura 10 was the next part of our tasting journey experience.

Jura distillery is a Scotch whisky distillery on the island of Jura in the inner Hebrides off the West coast of Scotland. Jura 10 is a part of the new core range of whiskies launched by Isle of Jura in early 2018. It's initially aged in American white oak bourbon barrels before enjoying a finishing period in Oloroso sherry butts. 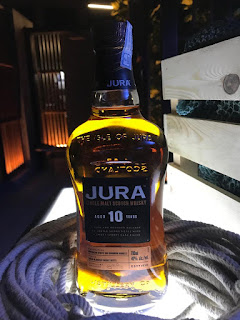 Tasting Notes:
Nose: Honeyed barley and peaches in syrup, with lightly smoky
Palate: Subtly spicy followed by a fruity
Finish: Dark chocolate and a touch of smoke rounds things off.

Comparing both expressions most of the people around seemed to be enjoying their Dalmore while I personally enjoyed sipping my Jura through the evening.

While Vbev and SMAC ensured we had a spirited evening, the hotel put up their best in ensuring our stomachs were adequately lined for the malts that were to follow. The finger foods included fried chicken, mutton galouti kabab, baos, cheese rolls, bruschettas and many more. My personal favourite was Arancini.


Kudos to SMAC and the hotel team for putting this together for Bengaluru. 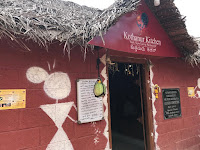